My experience as a Peer Reseacher over the last year and a half has been incredibly fulfilling; rich with opportunities to explore current issues and engage with young people in Plymouth while making a change in our community.


It has not only facilitated my own personal development but has allowed me to do active youth work in our local area while working and listening to the passions and concerns of local young people.
While working at Young Devon, we have visited a number of youth groups, discussed the topic of youth violence, and conducted both formal and informal interviews with both groups and individual young people. If you attended our changemaker event in October, you might already be aware of the four core themes that we ascertained from our thematic analysis. The one that particularly stood out to me was the mentality that young people had surrounding the issue of youth violence.
Here we found that Young people were regularly questioning their own and others outlooks on life in general and then specifically violence. Young people regularly called for a change in societal attitudes and the perceptions held upon young people and youth violence. This area included things such as: young people questioning their moral judgments, their philosophical viewpoints on being a bystander and debate between intervention and protection from harm. Ideas were raised such as ‘sharing kindness’ and ‘having a more positive and altruistic outlook on life’ which the young people believed were the solution to youth violence (although it must be noted that any method of enacting or promoting this was seldomly discussed). Concepts such as the way one interacts with their peers and friends were also raised and grouped into this category.

The young people we had spoken to suggest a plethora of ideas to help enact a responsive change after hearing of the results of our research. Just from the changemaker event alone, people from Plymouth suggested all of the following suggestions: 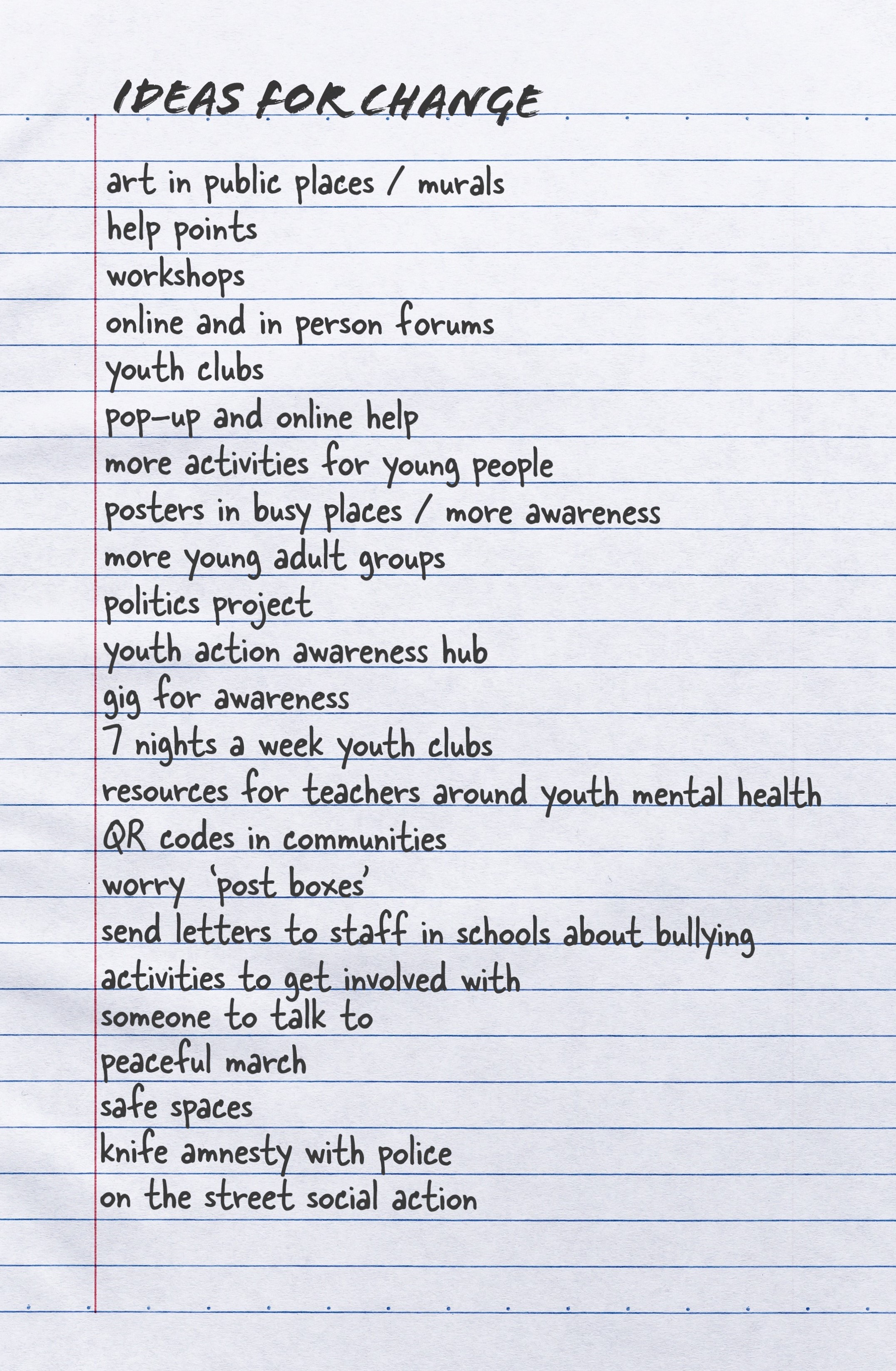 Going forward, in response to these ideas, we’re currently in the process of creating resource packs with the aim of addressing the young people’s concerns that have been raised. These will be separated into two separate parts with on half aimed at young people and the other at adults in positions where they are working with young people. These will focus on addressing a number of issues from mental health to the bystander effect and from challenging both young people’s and adult’s mentalities to what to do in dangerous situations where someone might be injured and even teaching people how to be more trauma informed. The aim of this is to address our umbrella issue which is education of youth violence in general. From this I hope to see young people and adults wanting to change their attitudes and behaviour in a more positive light, something which many of the young people we have spoken to seem so passionate about as well.


Want to find out more about the Peer Action Collective? Visit our PAC webpage, to read all about our project! We are currently looking for 10-20 year olds to become Changemakers, and local businesses and authority figures to sign our Professional Pledge.